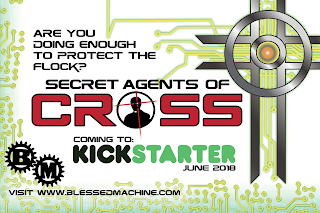 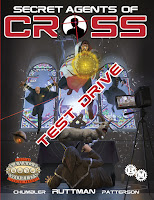 Note: Secret Agents of CROSS is now on Kickstarter here!  You can grab a Test Drive of the book here!

“Without politics, without compromise, and without fear, CROSS will stand and protect all God-fearing people from evil.”

What is CROSS?
CROSS is a clandestine spy agency also known as the Catholic Response Organization to Strategize and Strike. CROSS was created by rogue Cardinal James McDonnell to take the Pope's
prayers and convert them into actions. He and his command staff create missions to protect the flock from evil using cutting-edge technology coupled with saintly magic honed over 2000 years of history.

Why Savage Worlds?
The CROSS organization was originally created as part of a Champions game years ago. When I decided to create a setting around it, I wanted to capture my vision of an organization that only includes agents that are the best of the best. They are the only people suited for the types of adversaries that they will face.

I wanted the players to feel like they were playing competent characters from the start. When I discovered Savage Worlds, I thought that the exploding dice mechanic of Savage Worlds
along with the bennies system modeled that feeling. After a few sessions at Garycon, I knew this was the system for Secret Agents of CROSS.

You can also use the Savage Worlds Test Drive v6 located here:
https://www.peginc.com/freebies/SWcore/TD06.pdf

Like our own, the world of Secret Agents of CROSS contained thousands of years of religious persecution that shaped the modern world. Supernatural has existed in the world since the
beginning of time and continues to exploit the world from their extra-dimensional realms and secret lairs. Technology in the world is similar to our own, but slightly more advanced. CROSS
engineers have developed cutting-edge weapons and espionage gear as well as power armor and cybernetics.

What's in the Book?
For both gamemasters and players, the complete book includes:
• A brief history of Biblical events that affect the modern world of CROSS.

• A detailed history of the creation of CROSS and the entire command staff.

• 10 Roles for players to choose from to promote CROSS's setting feel. Optional rules to expand, create, or change Roles.

• Over 40 unique weapons created by the engineers of CROSS.

• A primer on how to be a secret agent of CROSS including the Holy Vows of CROSS, Catholic and Spy jargon, and a prayer generator for performing Miracles.

For gamemasters only, the complete book provides:
• Suggestions for how to handle the nature of supernatural things and how they are affected by normal and supernatural powers.

• Suggestions for the use of CROSS in various genres including Fantasy, Horror, and Superhero settings.

• Suggestions on how to provide the best gaming experience for each role.

• Double-secret-GM's-eyes-only section of secrets not revealed in the other chapters.

• Over 30 powerful relics and artifacts to place into missions.

• Over 30 adversaries to interact with your agents. Some good, some bad, some hard to tell.

• 3 complete missions for your agents to begin defending the flock.

• A detailed mission generator.
Email ThisBlogThis!Share to TwitterShare to FacebookShare to Pinterest