Secret Agents of CROSS at Garycon 2015

With EU Behind me, I am back to working on Secret Agents of CROSS. I have three missions to run at Garycon 2015 this year. Its next week already!

Secret Agents of CROSS: The King's Trump (The original first classic mission is back!)
Why has a small time art dealer garnered the attention of several terrorist groups? Chatter indicates he has something code-named The King's Trump up for sale and you have been sent on a mission to prevent it from falling into enemy hands. Unfortunately, nothing is ever straight forward or easy when you live the life of a Secret Agent of CROSS.

Secret Agents of CROSS: Blood & Teeth (Brand new mission!)
Your team has been tasked with investigating the disappearances of people from a Catholic village in Eastern Turkey. Intel points to straight forward religious unrest, but the mission rapidly unfurls into a complex tale of power and revenge. Join your fellow CROSS agents and embark on a mission of Blood & Teeth.

Secret Agents of CROSS: Blood Ties (Most popular mission!)
A missing persons case is usually mundane and simple, but when your case comes from the heart of the Vatican and you are a Secret Agent of CROSS no case ever is. Join your teammates as you travel to Jolly Old England to locate a celebrated otolaryngologist that has gone missing. Its a cut-throat world out there so you better smell out his intentions before you hear of his untimely demise.

Here are the pregens if you wanna take a look:

Wow! A Brand New Mission for Secret Agents of CROSS! We are sure this will be a bloody good time for your agents: FIELD OF BLOOD! Get it ... 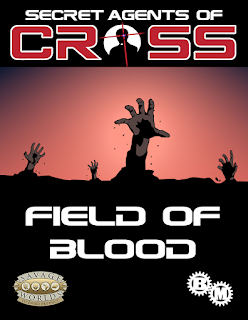